Monday, September 27, 2021
Chikkamagalur: It is not every day that you listen to a story of revenge this weird. A monkey in the neighborhood of Kottigehara village of...

Chikkamagalur: It is not every day that you listen to a story of revenge this weird. A monkey in the neighborhood of Kottigehara village of Chikkamagalur district in Karnataka has become a dreadful villain in the life of Jagadish B B since 16 September, 2021.

A young male monkey of Bonnet Macaque species, around five years old was roaming around Kottigehara snatching fruits and snack packets every now and then. People didn’t worry much since that is the general nature of any monkey and were just cautious when they spotted him. Once schools reopened, this monkey was hovering around Morarji Desai School in the area and children were scared of him. Someone complained to the forest department and a team came in to trap the mischievous monkey.

Catching this monkey was no small feat. The forest department staff called in nearby auto drivers and other people around to help them chase the monkey into a particular direction so that they can trap him. Meanwhile, auto driver Jagadish who also went along to help the forest department team teased to divert the monkey into the direction. The distressed monkey suddenly hopped towards him and attacked him. It bit his hand hard and scraped him off. A visibly startled and scared Jagadish ran away from the spot. The monkey chased him wherever he went. He hid inside his autorickshaw and it attacked the vehicle and tore down the covering sheets.

This went on for some time. Finally, after a tedious three-hour operation by a group of more than 30 people, the monkey was trapped. Forest department officials took it to Balur forest which is around 22 kms and released him there.

“I was scared as hell. The mad monkey was following me everywhere. It bit me so hard that my doctor said my wounds will take at least a month to heal. I can’t drive my auto rickshaw which is my bread and butter. Also, I didn’t go home that day fearing the monkey would follow me home. I have small kids at home. What if it attacks them? I am still very afraid.”

But the story is not over yet.

The people of Kottigehara were relieved to know the monkey is gone and were back to their routine. And in less than a week, the monkey is back! Yes, believe it or not the monkey has cleverly hopped on to a truck that passed through a road near the Balur forest and reached Kottigehara happily. Jagadish was scared as hell when he heard it.

“I felt a chill go down my spine when I heard that the monkey is back in the village. I called the forest department myself and asked them to rush immediately. I haven’t gone out of my hiding. I know it is the same monkey because we all saw a mark on his ear last time and my friend said the villagers noticed it” he said.

“We really don’t know why the monkey targeted one man. We don’t know if he had caused any harm to the animal previously or was it just an immediate reaction. But, this is the first time we have seen a monkey behaving like this though monkeys attacking humans are not unheard of,” said Mohan Kumar BG, range forest officer, Mudigere. His team carried out the monkey-trapping operation.

The forest department team caught the monkey on 22 September for the second time. This time, they have released him in a forest area further far off. Jagadish is hoping that the monkey doesn’t return. To be on the safer side he has decided to stay indoors for a few days, just in case. 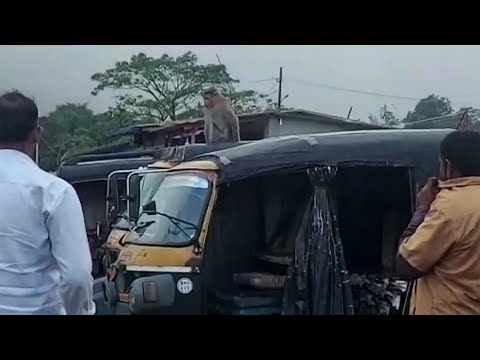