Around three months ago, Adithyan D Thambi, a sixth standard student from Kalathode in central Kerala’s Thrissur town, chanced upon a turtle while fishing in a local canal. As soon as he reached home, Thambi clicked a picture of the cute-looking red-eared turtle and posted it on his social media account. Sandeep Das, a researcher with the Kerala Forest Research Institute (KFRI) at Peechi near Thrissur, noticed the picture on social media. He identified it as a red-eared slider turtle, an exotic and invasive species that is a significant threat to the biodiversity of water bodies in India. Das cautioned Thambi against releasing the turtle back into the waterbody.

Around 19 red-eared sliders, seized from different parts of Kerala, are being studied at KFRI’s Nodal Centre for Biological Invasions (NCBI).

The red-eared slider turtle (Trachemys scripta elegans) is an attractive animal because of its tiny size and appealing colour, which makes it a popular pet in India. Once the turtle becomes an adult though, it can be a challenge to take care of and keep safe and owners prefer to release it into water bodies.

According to TV Sajeev, a senior principal scientist with KFRI, who has been nominated in recent days by the Union Ministry of Environment, Forest and Climate Change (MoEFCC) as the national level focal point for the Asia-Pacific Forest Invasive Species Network (APFISN), the red-eared slider, an invasive turtle species in India, is spreading rapidly across water bodies in India, especially in the southern states of Karnataka, Tamil Nadu and Kerala. Last April, police and forest officials seized a pair of such turtles from the bags of four people in Kerala – they were initially taken into custody from the hill station, Munnar, for cheating a taxi driver and the turtles were discovered in their bags. They said they bought the turtles from Bengaluru to resell to an individual who wanted to keep them as pets.

“For over a decade, our institution (KFRI) has been engaged in research on alien invasive species, and the latest is this turtle. With the active involvement of the forest department, we are collecting such turtles and accommodating them in NCBI to study more on them with collaborative involvement of experts worldwide,” Sajeev told Mongabay-India.

On its part, the NCBI has started survey and restoration efforts to remove the red-eared slider turtle from India’s wild and water bodies with the help of different state governments and various environmental NGOs. It is also advising the union government to initiate large-scale advertisement campaigns discouraging pet shops from selling the species and instructing pet owners not to release them to the wild. The NCBI also has a national-level facility to collect invasive species from any part of the country.

An illegal journey from the US to India

The red-eared slider is also part of the international wildlife trade where it is illegally transported to India, mainly through Chennai and Trichy airports. In December 2018, customs officials at Chennai international airport had detected two cases of attempted smuggling of these exotic turtles. Two different travellers from Bangkok arrived with a total of 7200 juvenile turtles to retail them in the south Indian market. A year later, officials of the Directorate of Revenue Intelligence at Trichy international airport had seized 4,500 red-eared slider turtles from three passengers who arrived on a Sri Lankan Airlines flight from Bangkok. The trio was carrying the turtles in 30 carton boxes.

Once the most popular in the American pet trade market, the prices of red-eared sliders have crashed in India in recent years as they have started multiplying locally.

Originated in the Mississippi River and the Gulf of Mexico, they started becoming a global menace between 1989 and 1997 when farmers and pet traders in the US exported over 52 million red-eared sliders to different countries, mainly China, according to the International Union for Conservation of Nature’s Global Invasive Species Database. In India, smugglers bought them illegally from outside the country and retailed them using the network of pet shops and street vendors.

According to Sneha Dharwadkar, a Maharashtra-based herpetologist and co-founder of Freshwater Turtles and Tortoises of India (FT​TI), red-eared sliders have the name because of the vibrant red marks on their heads which resemble ears. Unfortunately, they are one of the world’s hundred worst invasive species. India needs considerable scale awareness on why such harmful animals are not preferred for release into the wild, said Dharwadkar, who started FTTI along with Anuja Mital to document the distribution of Indian turtles, and to protect native species of turtles and tortoises from the threat of invasive species from outside the country. Adds KFRI researcher Sandeep Das, the invasive turtles crowd out native turtle species in ponds, lakes, and other water bodies, create harmful algal blooms and expose humans to salmonella that they commonly carry. NCBI suspects that the red-eared sliders have played a role in the recent spread of Shigella bacterial infection in some parts of north Kerala. Research is going on to confirm this.

India does not have regulations to monitor the trade of exotic species in the country. “If not controlled, this (turtle) species would devastate aquatic life across India. As an invasive species, the red-eared sliders lack any natural predators. As omnivores, they pose a severe threat to both native aquatic animals and plants as they compete with native turtles for resources,” warns Dharwadkar, who hails from Gujarat, another state known for the large-scale spread of this species. “To ensure the safekeeping of native species, large-scale awareness campaigns and actions are required to check their spread. Such efforts must be community-based,” she said.

According to Sajeev, these invasive turtles threaten the native species by competing with them for food, nesting, and basking space, and hiding places. In addition, the native turtles of India have no proven immunity to the parasites, and various diseases spread through the red-eared sliders. Normally, all kinds of turtles can live more than 20 years, and if an invasive species gets free, it will pose a threat to the local biodiversity for a long time, says Sajeev.

Though it is difficult to tally the red-eared slider’s population, Dharwadkar says they occupy many urban lakes and water bodies of India. However, in recent times their population is spreading to water bodies of rural India, where the threat posed by them is of a higher magnitude, she said.

Experts say this species can live for months without food, slowing their metabolism when resources are scarce. And when food is prevalent, they keep growing. Also, these reptiles eat a variety of food, including fish, insects, vegetation, and even human snacks like potato chips. As their numbers have exploded, native species are suffering.

Beyond educating people about being responsible about pet ownership, Dharwadkar and Sajeev admit there are no perfect solutions to the red-eared slider problem plaguing India. “There are animal lovers who buy such turtles and release them in water bodies thinking they are doing a good thing to nature through such an action. But they fail to distinguish between native and invasive species. Also, they are least aware of the survival of species domesticated once and suddenly exposed to the wild later,” said Dharwadkar.

“Like Burmese python that was introduced long back in the US as a pet and that caused severe damage to the South Florida Everglades ecosystem, the red-eared slider has already affected Indian urban water bodies severely,” said Sajeev. Therefore, according to him, there must be vigilance against its spread in the Brahmaputra and other river ecosystems in the northeast. In addition, experts say, northeast states of India are home to more than 72 percent of the turtle and tortoise species of the country, which are rare and endangered.

Sajeev said his new capacity as a national focal point for the Asia-Pacific Forest Invasive Species Network (APFISN) would help him prompt the government to prepare a national repository for red-eared sliders and other pets that are invasive.

This article was originally published on Mongabay.com.

Mongabay-India is an environmental science and conservation news service. This article has been republished under the Creative Commons license. 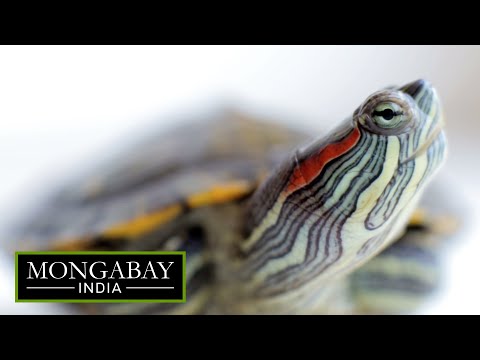