Monsoon session ends, war of words doesn't as Centre, Opposition up the ante

Thursday, August 12, 2021
A war of words has broken out between the Central government and the Opposition parties after the tumultuous Monsoon Session of Parliament t...

A war of words has broken out between the Central government and the Opposition parties after the tumultuous Monsoon Session of Parliament that ended two days ahead of schedule on 11 August.

Each side has blamed the other for the early curtailment. While a group of Union ministers on Thursday addressed a joint press conference and demanded that the Rajya Sabha chairman should take the strongest possible action against those who broke the rules of the House, leaders of 11 Opposition parties issued a joint statement on the same day, condemning the "authoritarian attitude" and "undemocratic actions" of the government. So here's a breakdown of what each side has to say.

The Union ministers have accused the Opposition leaders of manhandling marshals. Union Minister Piyush Goyal said the Opposition's "my way or highway" approach is "highly condemnable".

Goyal, also the leader of House in Rajya Sabha, said the group of ministers met Chairman M Venkaiah Naidu and deputy chairman Harivansh Narayan Singh and made an earnest appeal that the strongest possible action should be taken against the Opposition MPs for their deplorable behavior.

He said the Opposition was unable to accept that the country has given up on them and their behaviour in Rajya Sabha on Wednesday was a new low in parliamentary democracy.

"The secretary general's table in Rajya Sabha is not meant for dancing and protesting," Union Minister Anurag Thakur said at the press conference, referring to an incident when an Opposition leader was seen standing on a table inside the Rajya Sabha. He alleged that "anarchy from streets to Parliament" was the Opposition's only agenda during the Monsoon Session and demanded that they should apologise to the nation for their actions.

The day before yesterday, some MPs climbed on top of the tables (in Parliament). They were feeling proud of themselves. They thought they've done something great. They tweeted after shooting its video. Video shooting is not allowed: Parliamentary Affairs Minister Pralhad Joshi pic.twitter.com/sggb9OC29i

Meanwhile, leaders of 11 Opposition parties, also on Thursday, accused the government of deliberately derailing Parliament and alleged that Opposition MPs, including women members, were manhandled by outsiders who were not part of Parliament security.

In a joint statement, Opposition leaders condemned the "authoritarian attitude" and "undemocratic actions" of the government and said what had happened in the Rajya Sabha on Wednesday was "shocking" and "an insult to the dignity of the House and humiliation of the members."

Accusing the Centre of stonewalling their demand for discussion, the Opposition leaders charged that it was evading a debate on the Pegasus snooping issue. The leaders of Opposition parties earlier met in Parliament and later marched in protest to Vijay Chowk against the government.

The parties whose leaders were present at the meeting include those from the Congress, NCP, Shiv Sena, SP, DMK, CPIM, CPI, RJD, IUML, RSP and Kerala Congress (M). TMC, AAP and BSP were not part of the meeting of Opposition leaders that was also attended by former Congress president Rahul Gandhi.

"What happened in Rajya Sabha yesterday was shocking, unprecedented, sad and an insult to the very dignity of the House and humiliation of the members of the august House," they said in the joint statement.

The Opposition leaders, too, later met Naidu and complained against the alleged manhandling of its MPs.

Naidu, who received delegations of opposition parties and the government on that today, listened to their respective versions of events, which took place in the House on August 11. He told both parties that ensuring the smooth functioning of the House was the collective responsibility of both the government and the opposition.

Earlier, however, before his meetings with the two delegations, Naidu held an hour-long meeting with the senior officials of the Rajya Sabha Secretariat on the proceedings and turn of events in the House over the last few days, including the issue of deployment of martials on the last day of the session. He asked them to report back to him on the manner and scale of deployment later in the day.

Later in the day, the officials reported to the chairman of the Upper House that no outsiders were deployed as martials in the Rajya Sabha on August 10. They stated that only the watch and ward staff of the Rajya Sabha and Lok Sabha Secretariats were deployed, which is permitted, based on the need. They also informed that only 14 martials were deployed to started with and were gradually scaled up to 42, based on the situation in the House and in view of the incidents in the House on previous days.

The Monsoon Session, which was to conclude on 13 August, was abruptly brought to an end on 11 August. The Lower House functioned for only 21 of the 96 stipulated hours during the entire session and its productivity was at 22 percent. Meanwhile, the Upper House registered a 28 percent productivity, its eighth least productive session since 1999.

The behaviour of the Opposition members was criticised by both the Lok Sabha Speaker and the Rajya Sabha chairman. While Naidu broke down over the ruckus in the House calling it "sacrilege in temple of democracy, Speaker Om Birla said he was "extremely hurt" by the continuous disruptions. 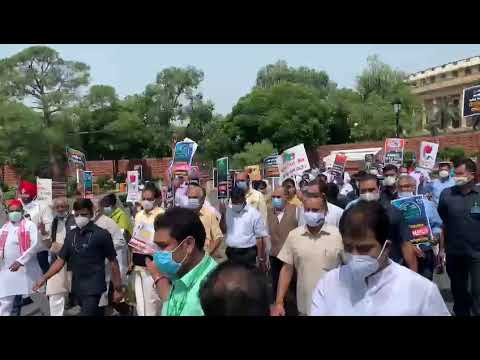