Saturday, August 7, 2021
A car like the Batmobile or a fire-breathing dragon are fantasies for many people. But one man has tried to turn such ideas into reality. Va...

A car like the Batmobile or a fire-breathing dragon are fantasies for many people. But one man has tried to turn such ideas into reality. Vahan Mikaelyan, a Russian mechanic has transformed a car into a flame-throwing machine.

Mikaelyan worked his magic on a model of the VAZ-2106 Zhiguli, also known as a Lada 1600, to create an improvised 'dragon'. A clip shows the car spewing fire out of headlights, which hit the wall at the other end. He revealed that he was planning a race, where the losing car would be set on fire by his Lada.

This is not the first time Mikaelyan has been in the news. The mechanic has often given strange twists to cars. In June last year, he made headlines for modifying a vehicle to look like a giant spider. He added limbs to a Lada car, creating a massive version of a moving spider.

While Mikaelyan has not revealed the secret behind his latest experiment, several theories have begun circulating on social media regarding the way to make flames shoot out of a car.

A thread on the social media site Reddit has hundreds of comments regarding the car. Some people provided an explanation for the car's flame-shooting abilities. Others found the clip hilarious, comparing the car to a Bond vehicle and the Batmobile.

The trend of improvising vehicles to adapt them for more than driving is slowly gaining traction, often with disastrous results. In June this year, a Chinese man tried to barbecue kebabs using his Lamborghini's exhaust. However, the attempt ended up destroying his food and damaging his car. 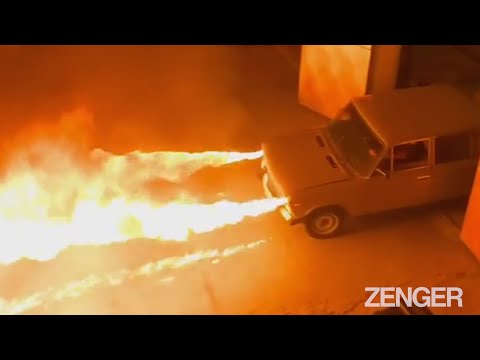