Tamil Nadu woman promises eggs and milk to cobra after coaxing it out of home; video goes viral

Thursday, September 9, 2021
How do you think people react when they see a snake? For most, their first instinct is to run far away from the reptile. But this middle-age...

How do you think people react when they see a snake? For most, their first instinct is to run far away from the reptile. But this middle-aged woman is breaking the Internet for the cool, composed manner in which she talks to a cobra, promising to bring it food later if it leaves her house.

In the video, reportedly from Tamil Nadu’s Coimbatore, the woman can be seen coaxing the snake to leave the front yard of her home. She gently guides the reptile away with a stick and opens the door for it, all while talking to it in an affectionate manner. The woman promises to visit the cobra later and bring eggs and milk for it. The 53-second clip ends with the snake leaving the house.

The video which has gone viral on social media, has left viewers stunned by the manner in which the woman handled the cobra. Several users were shocked by the fearlessness shown by the lady while dealing with the reptile. Many were also left surprised at the fact that the snake appears to accept the woman’s words and leaves without any fuss.

Many locals have said that it is common practice for women to offer milk and eggs to snakes in the area. According to them, it was this practice that the woman was referring to when she was talking to the snake.

This is not the only video featuring a cobra that has gone viral in the last few days. Recently, a video of a king cobra ‘standing up’ to its full height during a rescue, gained traction on social media.

As the rescuer was pulling the snake by its tail to transport it safely, the cobra suddenly rises up to almost four feet high to try and stall the rescuer. The incident, which reportedly took place in Karnataka’s Belthangady, saw the 14 feet long reptile being safely rescued and released into the forest. 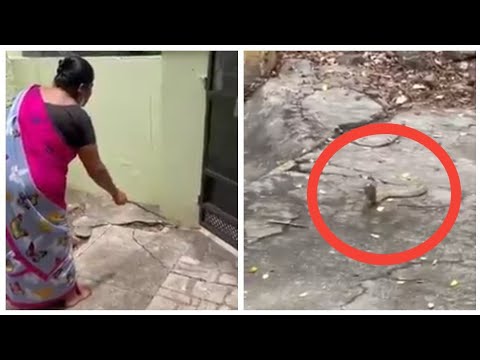