Sunday, October 31, 2021
The National Day of Unity or Rashtriya Ekta Diwas is observed annually on 31 October to commemorate the birth anniversary of Sardar Vallabhb...

The National Day of Unity or Rashtriya Ekta Diwas is observed annually on 31 October to commemorate the birth anniversary of Sardar Vallabhbhai Patel. This year marks the 146th birth anniversary of Patel, who was the first home minister of India and played a crucial role in the integration of princely states into the Union of India.

On the day both Prime Minister Narendra Modi and Home Minister Amit Shah paid their respects to the Congress leader. While Shah visited Kevadia in Gujarat where a mammoth statue of the leader is installed, Prime Minister Modi, who is on a foreign tour right now, addressed the people via a televised video speech.

Prime Minister Narendra Modi said that Sardar Patel is not just a mere historical figure but a leader who lives in the heart of every countryman and people who are taking his message of unity forward. They are the true symbol of unity. The Rashtriya Ekta Parades across the country and events at the statue of Unity reflect the same spirit, he said.

The prime minister also said that Sabka Prayas (unified effort by all countrymen) is even more relevant in the Amrit Kaal of Independence. "This 'Azadi ka Amrit Kaal' is of unprecedented growth, achieving difficult goals and building the India of Sardar Saheb's dreams.. 'Ek Bharat'" which to him meant, "equal opportunities for all including women, Dalits, deprived section of people, tribal and forest dwellers", he said, "where housing, electricity and water is within the reach of everyone without discrimination".

"This land mass where 130 crore Indian live is an integral part of our soul, dreams and aspirations," he said.

Referring to the strengthening of India's democratic traditions by the emotion of 'One India', the prime minister called for a collective effort from every citizen in the direction of achieving the goals of the country. The prime minister emphasised that Sardar Patel wanted a strong, inclusive, sensitive and alert India. An India that has humility as well as development. "Inspired by Sardar Patel, India is becoming fully capable of meeting external and internal challenges", he added.

Referring to steps taken to strengthen the country in the last seven years, the prime minister informed that the country got rid of unnecessary old laws, strengthened the ideals of unity, and emphasis on connectivity and infrastructure has reduced geographical and cultural distances.

"Today, strengthening the feeling of 'Ek Bharat-Shreshth Bharat', a 'Mahayagya' of social, economic and constitutional integration is going on" and the country's resolve and capability in water, sky, land and space are unprecedented and the nation has started moving on the path of new mission of Aatmnirbharta," he said.

The prime minister reiterated the power of 'sabka prayas' in the fight against coronavirus where new COVID hospitals, essential medicines, 100 crore doses of vaccines were made possible due to the collective efforts of every citizen.

Referring to the recently launched PM GatiShakti National Master Plan to harness the collective power of government departments, the prime minister said that if along with the government, people's 'Gatishakti' is also leveraged, nothing is impossible. Therefore, he said, "our every action should be marked by consideration for wider national goals." He gave examples of students who can consider the sector-specific innovations when they choose their stream of study or while shopping, people should keep the goal of Aatmnirbharta, along with their personal preferences, in mind. Similarly, industry, farmers and cooperative institutions too should keep the goals of the country in mind while making their choices.

'Kevadia is a shrine to national unity and patriotism

Meanwhile, Shah paid floral tributes to Patel at his 182-metre tall statue, which is the tallest in the world, in Kevadia on Sunday. The statue was inaugurated in October 2018 by Prime Minister Narendra Modi. Speaking at the event, the home minister said that Kevadia has become a pilgrimage site.

"Kevadia is not just the name of a place, it has become a shrine — a shrine of national unity, of patriotism. This sky-high statue of Sardar Patel is giving a message to the world that India's future is bright, that nobody can damage the unity and integrity of India," he said.

Shah said the day had unique importance. “Today's National Unity Day is a day of Azadi ka Amrit Mahotsav… After Independence, while leaving, Britishers had conspired to divide into several pieces. Patel foiled that conspiracy and resolved to make 'akhand Bharat'", he said.

In a veiled attack on Congress, Shah said attempts were made post-Independence to forget Patel and his contributions, but the situation has changed as the world's tallest statue is a testimony of the changed realities.

"After independence, his contributions were never given due respect. He was neither given Bharat Ratna nor proper respect. The situation has changed. He was given Bharat Ratna and this world's tallest statue is before us to see,"
Shah further said that in 2014, when the Bharatiya Janata Party (BJP) formed the government at the Centre, 31 October was instituted as National Unity Day.

"When there was a change in the country in 2014, the government was formed under the leadership of Modi ji, then it was decided to celebrate 31 October as National Unity Day. This was done so that the struggle that Sardar Patel put in for independence for years continues to inspire the younger generation of the country," Shah noted.

With input from agencies 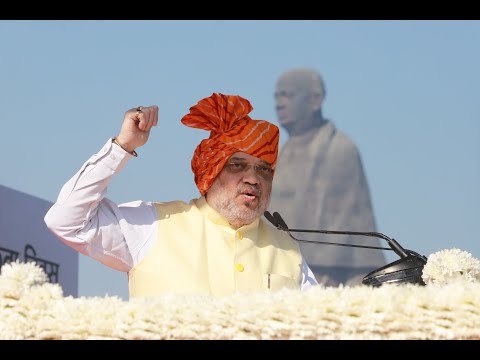