Wednesday, November 24, 2021
A shocking incident took place at the Nehru Zoological Park in Hyderabad where a 31-year-old man tried to enter the African Lion enclosure b...

The man was later rescued by the staff of the zoological park. The terrifying incident was caught on camera and has gone viral on the internet.

In the one-minute clip, the man, later identified as G Sai Kumar, can be seen sitting on the slope of a boulder in the moat area of the lion enclosure. Just below the boulders, the lion can be seen waiting for the man to come down and is staring upwards in his direction.

Kumar kept sitting on the boulder's slope and was waiting for the lion to move from its spot so that he jump down into the enclosure. Towards the end of the clip, the zoo authorities came to his rescue and take him away from there.

The authorities alerted the 31-year-old Kumar and stopped him from entering the enclosure of the lion. Several voices can also be heard in the background, shouting and asking Kumar to be careful and not enter the moat area.

The 31-year-old man was handed over to the Bahadurpura Police Station after being rescued by the zoo authorities. No case has been registered till date regarding the incident. 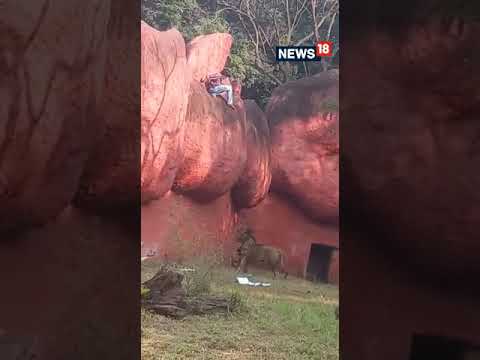