Russian President Vladimir Putin has threatened the existence of Ukrainian statehood as his army's invasion of the neighbour faces stiff resistance and his economy is increasingly asphyxiated by sanctions.

In the latest efforts to freeze Moscow out of the world economy, US-based card payment giants Visa and Mastercard announced they will suspend operations in Russia, while world leaders vowed to act over the intensifying onslaught.

"The current (Ukrainian) authorities must understand that if they continue to do what they are doing, they are putting in question the future of Ukrainian statehood," Putin said on Saturday.

"And if this happens, they will be fully responsible."

Since Russia's invasion 10 days ago, the economic and humanitarian toll of the war has spiralled, sending more than one million people fleeing Ukraine. Officials have reported hundreds of civilians killed.

Fighting for his country's survival, Ukraine's leader made a "desperate" plea Saturday to American lawmakers for the United States to help get more warplanes to his military and cut off Russian oil imports as Kyiv tries to stave off the Russian invasion.

President Volodymyr Zelenskyy opened the private video call with US lawmakers by telling them this may be the last time they see him alive. He has remained in Kyiv, the capital, which has a vast Russian armored column threatening from the north.

A Ukrainian paramedic who was shot while on her way to evacuate injured people from the outskirts of Kyiv was buried in the country’s capital on Saturday.

Valentyna Pushych was known locally as “Romashka,” which means “Daisy.” A friend described her as a “daredevil,” who was never afraid to “get under bullets.’

She was always “running to the most dangerous places” to rescue to the injured, Nataliia Voronkova said.

Pushych used to be a well-paid worker at a transport and logistic company. But in 2016, she joined the army as a paramedic in response to the separatist conflict in eastern Ukraine.

Several women, including some dressed in camouflage jackets, cried as her body lay in a casket at a service. A portrait of Pushych was on a wall nearby.

At the cemetery, red roses were placed on Pushych’s body. After she was buried, the dirt was covered with the flag of Ukraine. 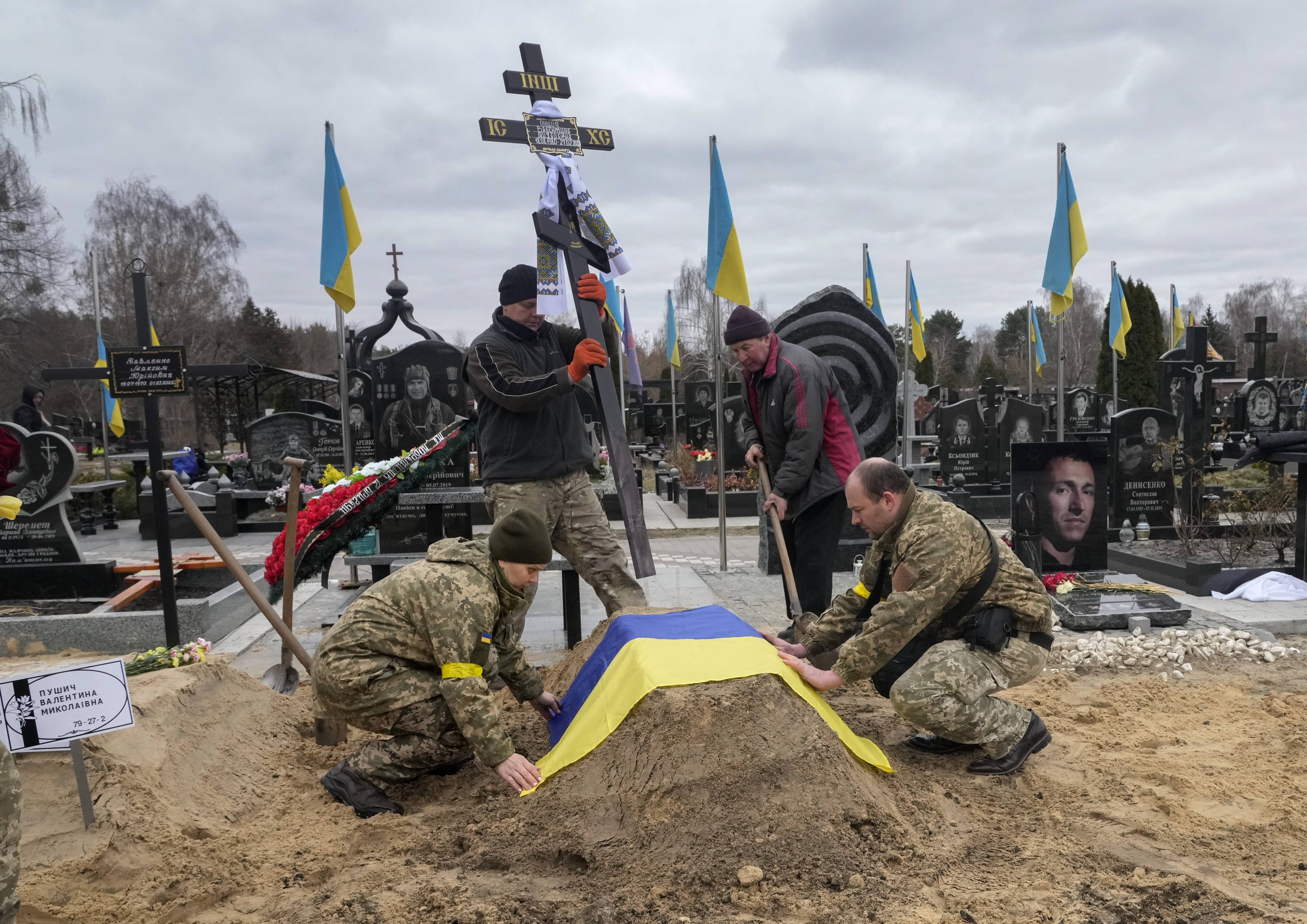 Ukrainian President Volodymyr Zelenskyy said on Saturday he had spoken to US President Joe Biden."The agenda included the issues of security, financial support for Ukraine and the continuation of sanctions against Russia," he tweeted.

As part of the constant dialogue, I had another conversation with @POTUS. The agenda included the issues of security, financial support for Ukraine and the continuation of sanctions against Russia.

Canada called Saturday on its nationals to avoid all travel to Russia because of its invasion of Ukraine and on Canadians in Russia to leave the country.

In an update to its travel advice, the Canadian Ministry of Foreign Affairs recommended that its nationals "avoid all travel to Russia due to the impacts of the armed conflict with Ukraine."

"If you are in Russia, you should leave while commercial means are still available," the statement added.

Ottawa had previously advised its citizens to avoid nonessential travel to Russia.

In the travel advisory, the ministry said that sanctions on Moscow and Russia's response "may have an important impact on the availability and the provision of essential service. Flight availability is becoming extremely limited."

Russian President Vladimir Putin warned Saturday that Moscow would consider any country imposing a no-fly zone over Ukraine to have entered into the conflict, while he also equated global sanctions with a declaration of war.

Ukrainian leader Volodymyr Zelensky has pleaded with the West to support a no-fly zone as his besieged country continues to resist Moscow's invasion, now in its second week.

Putin, who has dubbed his incursion a "special military operation" to defend separatist regions and previously argued that Ukrainian statehood is a fiction, also threatened his ex-Soviet neighbour's continued existence should its leaders "do what they are doing".

While Kyiv's allies have levelled sweeping sanctions to try to deter the Russian assault, they have so far ruled out a no-fly zone, fearing it could escalate into a wider war with the world's most nuclear-armed state.

Putin warned that a no-fly zone would have "colossal and catastrophic consequences not only for Europe but also the whole world".

"Any movement in this direction will be considered by us as participation in an armed conflict by that country," the Russian leader said during a meeting with employees of national airline Aeroflot.

He also suggested Kyiv's actions could cause Ukraine to lose its sovereignty.

US Secretary of State Antony Blinken on Saturday visited a welcome center set up by Polish authorities in what once was a shopping mall in Korczowa, close to the border with Ukraine, where roughly 3,000 refugees are taking shelter after the Russian invasion of their homeland.

While at the border later, Blinken stepped briefly onto Ukrainian soil to meet Foreign Minister Dymtro Kuleba, who predicted Russia would be defeated but appealed for more military assistance to lower the cost in lives that he said victory will require.

Russian President Vladimir Putin warned Saturday that Ukrainian statehood is in jeopardy and likened the West's sanctions on Russia to "declaring war," while a promised ceasefire in the besieged port city of Mariupol collapsed amid scenes of terror.

With the Kremlin's rhetoric growing fiercer and a reprieve from fighting dissolving, Russian troops continued to shell encircled cities and the number of Ukrainians forced from their country grew to 1.4 million. By Saturday night Russian forces had intensified their shelling of Mariupol, while dropping powerful bombs on residential areas of Chernihiv, a city north of Kyiv, Ukrainian officials said.

Xi and Putin toasted a friendship with "no limits" last month, but China-Russia relations are being tested by the war in Ukraine

With sanctions mounting against Russia, Beijing is scrambling to avoid being tainted by association with Moscowhttps://t.co/6pu05OuI3n

#UPDATE Card payment giants Visa and Mastercard are the latest major US firms to suspend operations in Russia over its invasion of Ukraine https://t.co/q0rI4K3pyj

Russian President Vladimir Putin warned Saturday that Ukrainian statehood is in jeopardy, while Ukrainian President Volodymyr Zelenskyy made a "desperate plea" for more planes as Russian forces continued to batter strategic locations with missiles and artillery and a temporary cease-fire failed.

Sanctions from the West continued, something Putin likened to "declaring war."

Putin continued to pin the blame for Russia's war against Ukraine on the Ukrainian leadership, saying if they "continue to do what they are doing, they are calling into question the future of Ukrainian statehood."

But Zelenskyy urged resistance. He said Ukrainians managed to keep control of key cities in central and southeastern Ukraine. In a video address to the nation, he urged Ukrainians in cities taken over by the Russian forces to fight back.

"It is a special kind of heroism -- to protest when your city is occupied," Zelenskyy said. "Ukrainians in all of our cities that the enemy has entered -- go on the offensive! You should take to the streets! You should fight!"

Thousands of Ukrainians in cities held by Russian forces took to the streets. Some climbed Russia's military vehicles and waved Ukraine's yellow and blue flag.

In a private call with US lawmakers, Zelenskyy asked the United States to help get more warplanes to his military.

US Senate Majority Leader Chuck Schumer, a Democrat from New York, said in a statement that Zelenskyy made a "desperate plea" and wants the US to facilitate the transfer of planes from Eastern European allies. Schumer said he will do all he can.

The US is considering sending American-made F-16s to former Soviet bloc countries in Eastern Europe that are now members of NATO. In turn, they would send their own Soviet-era MiGs to Ukraine. Secretary of State Antony Blinken, who met with Ukrainian Foreign Minister Dymtro Kuleba at the Poland-Ukraine border outside the town of Korczowa.Blinken, indicated fighter jets are under consideration.

"We are talking about and working on everything," Blinken said.

A temporary cease-fire in two key Ukrainian cities failed — and both sides blamed each other.

Ukrainian officials said Russian artillery fire and airstrikes prevented residents from evacuating the eastern city of Volnovakha, and Mariupol, a southeast port city of about 430,000. Putin accused Ukraine of sabotaging the effort.

"The city is in a very, very difficult state of siege," Vadym Boychenko told Ukrainian TV. "Relentless shelling of residential blocks is ongoing, airplanes have been dropping bombs on residential areas."

Boychenko said thousands of children, women and the elderly came under fire as they prepared for a possible evacuation through a safe passage corridor.

Directly witnessed or confirmed by The Associated Press

In Irpin, near Kyiv, a sea of people on foot and even in wheelbarrows trudged over the remains of a destroyed bridge to cross a river and leave the city. Assisted by Ukrainian soldiers, they lugged pets, infants, purses and flimsy bags stuffed with minimal possessions. Some of the weak and elderly were carried along the path in blankets and carts.

Kyiv's central train station remained crowded with people desperate to join the more than 1.4 million who have fled Ukraine.

Frequent shelling could be heard from the center Kyiv, the nation's capital.