Thursday, March 3, 2022
Ukraine's state emergency service has said that more than 2,000 civilians have been killed since Russia's attack on Ukraine started ...

Ukraine's state emergency service has said that more than 2,000 civilians have been killed since Russia's attack on Ukraine started on 24 February. Fighting continued for the sixth day as Russia intensified its attack on Ukraine's second-largest city Kharkiv.

According to the city's regional administration, 21 people were killed in Russian shelling in the last 24 hours.

A spokesman for the Russian Defense Ministry says 498 Russian troops have been killed in Ukraine and 1,597 wounded.

Major General Igor Konashenkov rejected reports about the “incalculable losses” of the Russians as “disinformation” on Wednesday and reported Moscow's casualties for the first time since the start of the attack last Thursday.

Konashenkov also said more than 2,870 Ukrainian troops have been killed and about 3,700 wounded, while 572 others have been captured.

A 64-kilometre convoy of hundreds of Russian tanks and other vehicles is on a road to Kyiv, a city of nearly 3 million people. The West feared it was part of a bid by Putin to topple the government and install a Kremlin-friendly regime.

Even as the crisis escalated, a Ukrainian delegation was head to the Belarus-Poland border to hold negotiations with Russia.

AFP quoted a Russian negotiator saying that a ceasefire will be on agenda.

The first round of talks was held in Belarus on 28 February.

Russian foreign minister Sergey Lavrov on Wednesday warned that a third World War, should it break out, will be "nuclear and devastating", amid spiraling tensions with the West over Moscow's ongoing massive military operation against Ukraine.

He was responding to US president Joe Biden that a third World War would be an alternative to Washington’s tough sanctions against Moscow.

India abstained from voting on a UN General Assembly resolution condemning 'Russian aggression on Ukraine.' The resolution was adopted. The vote was 141 to 5, with 35 abstentions.

In the UNGA all 193 members have equal vote, unlike the 15-member UN Security Council where one of the five permanent members Russia has veto power.

The Ministry of External Affairs said that 17,000 of the estimated 20,000 Indians have already left Ukraine.

It added 15 flights have been scheduled in the next 24 hours to bring Indians back.

Prime Minister Narendra Modi chaired a high-level meeting on Wednesday night on the Ukraine crisis as India stepped up its efforts to evacuate its citizens, mostly students, from the country under attack from Russia.  External Affairs Minister S Jaishankar and his Cabinet colleague Piyush Goyal besides senior officials attended the meeting.

Modi has held a series of meetings since Sunday to spearhead India's efforts to safely bring back its nationals, asserting that this is his government's top priority. Earlier in the day, the Indian embassy in Ukraine asked all Indian nationals to leave Kharkiv immediately to safe zones or further westwards.

The external affairs ministry has assured that every Indian citizen will be brought back from Ukraine.

According to a PMO statement, the two leaders "reviewed the situation in Ukraine, especially in the city of Kharkiv where many Indian students are stuck.  They discussed the safe evacuation of the Indian nationals from the conflict areas."

Earlier, the Russian ambassador-designate to India Denis Alipov said that Moscow was creating a safe passage for evacuation of Indians through the Russian territory, at New Delhi's request.

He added that Russia will probe Indian student's death in Ukraine. Naveen Shekharappa was killed in Russian shelling on Kharkiv on Tuesday.

In its press briefing, the MEA said that an Indian student identified as Chandan Jindal passed away of natural causes at a Ukrainian hospital."

Exclusive: Deputy Chief of Mission at the Russian Embassy in New Delhi on stranded Indian students

In an interview with Firstpost, Roman Babushkin said that Russia was taking steps to evacuate Indian students as soon as possible.

Biden shuts US airspace to all Russian flights

Biden used his first State of the Union address to highlight the resolve of a Western alliance that has worked to rearm the Ukrainian military and adopt tough sanctions — including closing US airspace to all Russian flights.

The prices soared Wednesday above $113 per barrel and natural gas hit a record peak before edging off their peaks, as investors fretted over key producer Russia's intensifying assault on Ukraine.

Sanctions on Russia which is the world's top crude producer have fears of supply shortages. 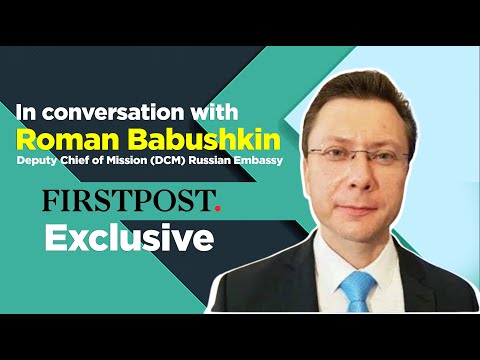