Saturday, June 11, 2022
A dashcam video of an attack outside a nightclub in Hong Kong has created stir on the internet. In the video, some people with machetes are ...

A dashcam video of an attack outside a nightclub in Hong Kong has created stir on the internet. In the video, some people with machetes are seen attacking a car near a traffic signal. As per reports, the incident happened in Hong Kong’s Lan Kwai Fong area on Friday.

Police has seized several machetes from the spot and arrested three men as well. According to the local news outlet HK01, a dispute between two groups at a nearby bar led to the attack. At around 2 AM local time (11:30 PM IST) a machete-wielding gang followed a group of people to the nearby traffic signal. When the cars stopped there, four attackers with machetes jumped out of a Lexus and attacked the white car adjacent to them.

Then another black van, which was behind the white car, swerved to the right, rammed into the Lexus and fled after hitting two of the assailants. Further in the clip, some of the machete-wielding men were  spotted running away from the crime scene.

After that, the Lexus is seen reversing while one man desperately tries to get back into the vehicle. The white van wasted no time speeding away. At the end of the video, the Lexus approached a downed attacker at the red light.

A report in the South China Morning Post stated that there were a total of eight people in the two vehicles and all of them were armed. One of them, who also had a handgun, opened fire at the assailants during the attack. When police reached the spot, one of the assailants was found shot in the back and one had been hit by a car. Another person had a knife injury on his head. All three of them were immediately rushed to the nearby Queen Mary Hospital.

After the incident, the street remained closed till the police officials finished gathering evidence from the crime scene. 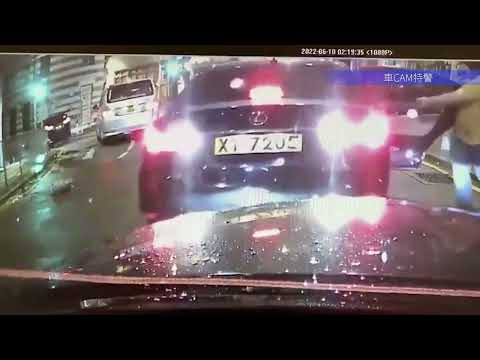