Watch: 2 major fireball events light up night sky over US on weekend

Tuesday, July 26, 2022
Astronomy enthusiasts in the United States were left awestruck after witnessing two fireball events over the weekend. On Friday, 22 July, a ...

The American Meteor Society (AMS) has released a statement that it received almost 150 reports of the sighting on 22 July.

Fireballs are another word for particularly bright meteors or shooting stars. These celestial bodies are the streaks of light we spot in the sky when space debris like meteoroids or asteroids enter the planter’s atmosphere at high speed and burn up in the process, as per Newsweek.
Fireballs are brighter than magnitude -4, which is about the same for the planet Venus as seen in the evening or morning sky, as per the AMS.

According to the AMS, the first fireball was spotted in Indiana, Alabama, Wisconsin, Iowa, Ohio, Illinois, Missouri and Kentucky. The society has also released a video of the ‘spectacular’ event, which is said to be a “"random occurrence" and not linked to any particular meteor shower.

The fireball event occurred on 22 July at 01:52 AM EDT over Indiana and surrounding states. The meteor entered the atmosphere over Advance, Indiana and disintegrated while still high in the atmosphere near Burlington in the same state.

This is not the only case of an astounding celestial event that was witnessed over the weekend. Another fireball event was reported in Texas on Sunday. According to the AMS, the fireball entered the Earth’s atmosphere over Cistern, Texas. Its flight ended some miles outside Austin.

“Several witnesses near the flight path reported hearing a delayed sonic boom, indicating that meteorites from this fireball may have survived down to the ground,” said the AMS in a statement.

The videos of the fireball events left space enthusiasts thrilled. Several found the clips to be ‘cool’, while others wrote that they actually witnessed the sight. 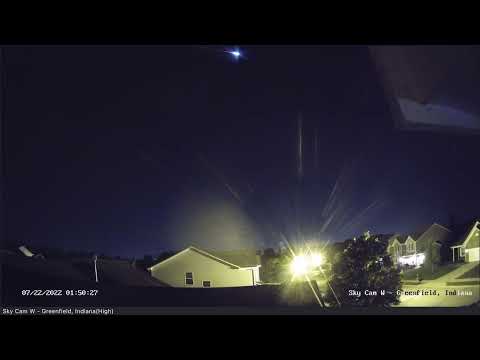